* Attended the last of the three Gold boy Bar Mitvah's.
Posted by dosten at 7:56 PM No comments:

Just finished Jeff Shaara's final episode of his WWII trilogy, "No Less Than Victory." It was one of his best. I always enjoyed his chapters dealing with the grunts and the thread of the two 106th Infantry Division soldiers in this novel was thrilling.
I can't wait for the Pacific War episode.
Posted by dosten at 6:38 PM No comments:

Last weekend we did a short camping trip up at Cuyamaca Rancho State Park. We had a great time with friends, old and new. One of the highlights was the nearby creek and waterfall, complete with swimming holes. 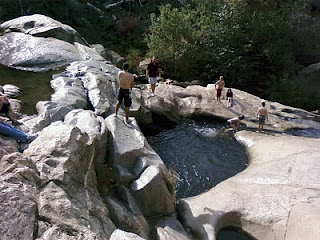 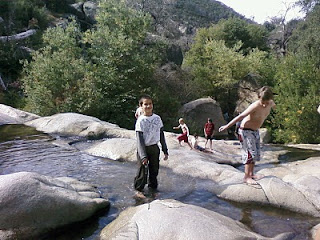 Bengt started taking karate at the local USSD dojo. The sensei is a great guy and is providing some much needed discipline for all the kids. Bengt just passed his yellow belt test and was very excited. 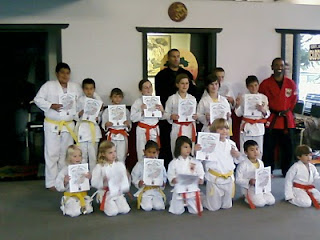 Posted by dosten at 6:35 PM No comments:

Email ThisBlogThis!Share to TwitterShare to FacebookShare to Pinterest
Labels: karate

UCLA On The Road

Last night I attended a UCLA On The Road event at the Estancia Hotel in La Jolla. It was a panel discussion centering around Coach John Wooden. The panel included gymnastics coach Valerie Kondos, Field, basketball player Kieth Erickson and track and field legend Rafer Johnson. The speakers had great stories of their lives with Coach Wooden. Very nice event and the facilities and food provided by Estancia were top notch.
Posted by dosten at 7:54 PM No comments:

Email ThisBlogThis!Share to TwitterShare to FacebookShare to Pinterest
Labels: UCLA

It is said that more books have been written about the Battle of Little Bighorn than that of the Battle of Gettysburg. I decided to try one of the more recent entries.
James Donovan's "A Terrible Glory: Custer and the Little Bighorn: The Last Great Battle" is a superb, in-depth narrative of the Battle of Little Bighorn and the events leading up to it. Donovan's style is almost movie-like in describing the 7th Cavalry's fight against the Sioux. My only complaint is the lack of detailed maps, but almost every book has this issue.
Posted by dosten at 11:16 AM No comments:

Mike Wright has written a series of books around the "What They Didn't Teach You About..." concept. They contain snippets and stories that revolve around a greater narrative. They are solid, if unspectacular, books; great for book reports.