According to reports, Monday's NFL game between Chicago and Arizona was the third most watched cable tv show ever. The second most was another football game. Number 1 was a 1993 episode of "Larry King Live." Do you know what the topic of that show was? The only good guess I could come up with was Bill Clinton. The correct answer is the Ross Perot-Al Gore NAFTA debate. I doubt this had to do with the county's concern over NAFTA but had more to do with the clown-like Perot and the moronic Gore fight.
Posted by dosten at 9:52 AM No comments:

One week after the first Indian Princess event (my first as tribal chief), I had my first campout with Bengt in the Indian Guides. This event was at Mission Trails, one of my favorite spots. We got there Friday evening and were quickly swarmed by mosquitos. I have been to Mission Trails several times and hadn't any problem with bugs, but we were practically eaten alive. Then the rain soaked our tent and we had to make a midnight move into the car to stay dry. A light rain accompanied us on our morning hike but then stopped for good after lunch. Overall, I was very pleased with Bengt and he had a great time. 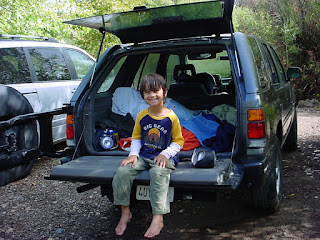 Posted by dosten at 8:38 PM No comments:

I capture this weevil in the front yard. I thought it might be one of the weevils wanted for mass destruction. But after close examination, I don't think this one of them. The amazing thing about this bug is that is lived in my speciman container for over 2 weeks without any food or water and is still alive at the time of this entry. Could this be some sort of "superbug"?

Posted by dosten at 2:52 PM No comments: