Troop 774 spent the day up at San Jacinto to get some training on snow skills.  We drove up Sat. morning and hit the tram up to the top.
The weather was pretty good.  The temperatures were in the 40’s with a bit of sun; no snow but there was some light mist and rain.
At the trailhead, we got the scouts into the snowshoes.  For most, including myself, it was the first time in snowshoes.  For the most part, it was pretty straight forward, but it was a challenge towing the sleds around logs and rocks.  As we started down the trail, many found they had not tightened their shoes enough and we stopped for adjustments quite often.  The snow was spotty in places so we were walking over mud or dirt for short lengths.  We hiked the Desert View Trail for about .75 miles to the second notch.  Unfortunately, the clouds and fog obscured the views down to the valley.
We then took off the shoes and the kids started playing in the snow.  We also started work on an igloo using the Ice Box kit.  The kit was contraption that build snow bricks in a precise circle.  As the walls grew in height, the box tilted and the diameter shortened to make the structure.  The kids were a bit annoyed at having to shovel so much snow but the end result was terrific!  We then got some hot drinks and ramen going to keep everyone warm.
After a while, some of the scouts started to get cold and wet.   So we had some clothing changes and then headed back to the tram station. 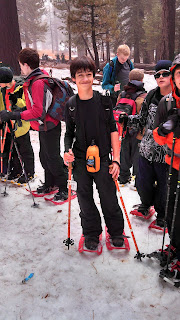 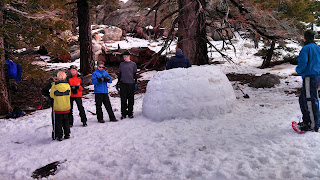