This past weekend, Bengt and I had the pleasure of joining the Colbaths for a weekend backpacking trek up to Mt. San Jacinto.  Even though I grew up in SoCal, I had never been up there so I was very excited.
We left home on Sat. morning and headed up to the tram station in Palm Springs.  After finding parking and getting tickets we were on a tram heading nearly straight up.   The ride was great! The tram rotated as it went up so everyone got to see the views.  We had a quick lunch at the top and headed on the trail to our camp at Round Valley.
The tram station was at 8400' and the camp was at around 9100'.  The hike was vigorous but not too bad. At the camp, we had to scout around for a while to find a good spot.  Some campers just set up where ever they felt.  I guess the rangers don't really care too much.  We set up camp, which for me meant my Ray Way tarp.  After dinner, I started to get a headache so lied down and tried to sleep.  I must be more sensitive to altitude than I figured since I had similar symptoms at Holcomb Valley a few weeks prior.  Night was windy and chilly but the trap was great.  I sealed the seams during the day so it should be impervious to all weather from now on!
After a slow morning, we started out to hit the peak.  Starting out, we filtered some water at the spring near the camp.  Bengt had .5 liters and I carried 2 as well as some snacks.  The hike up to the peak was challenging the well worth it.  The views from the top were magnificent!  After lunch at the top, we headed back down to the camp, which took much less time.  After getting to camp, my headache started to come back so I lied back down under the tarp.
We were originally going to stay another night but decided to change plans and head back down that evening.  We quickly packed up and headed back to the tram station.  It was another downhill hike except for the last 100 yards up the tram station walkway.  We had to wait about an hour for a ride back down due to some mechanical problems with the tram but got down ok.  It was amazing the temperature difference between the top and bottom!
Overall, it was a fabulous trip!  We put in over 12 miles of hiking with most of it on Sunday.  The kids did great in all aspects of the trek and are already experts in backpacking.
To solve my blister problem, I tried out some Band-Aid friction stick.  It seemed to work fine.  I didn't even get a hot spot after hitting the peak and back.  I also tried my new Merrell Sonic Glove barefoot shoes.  I highly recommend them.  They are the perfect medium between Five Fingers and regular hiking shoes.
As for food, I tried out some additional primal backpacking items.  For breakfasts, I had primal energy bars which were great.  For lunch, I had parmigiano reggiano and beef jerky.  The hard cheese held up much better than cheddar.  For dinner, I had my stews made from dehydrated veggies, meat and spices.  One dish had chicken and Tex-Mex spices.  It was very good.  The other dish had ground beef and tomato sauce.  Since we didn't stay for dinner the second night, I made this for lunch at work the next week.  It was good, but I added way too much tomato sauce. 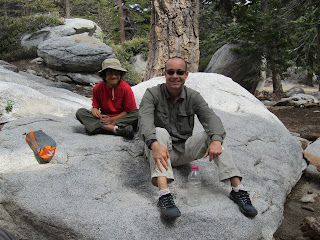 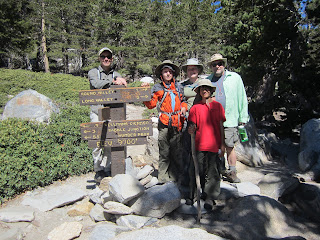 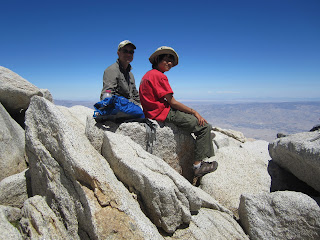 Email ThisBlogThis!Share to TwitterShare to FacebookShare to Pinterest
Labels: backpacking