We recently took a family trip to America's Historic Triangle in Virginia which includes Williamsburg, along with Jamestown and Yorktown.
We stayed at the Governor's Inn. It is older motel in need of some redo. But it suited us well since it was cheap and we hardly spent much time there.
We had a great time! I loved the history and the restoration of the Williamsburg area. One of our favorite activities was the "Revolution City" outdoor theater performance put on by the cast. It gave a real feel for the excitement and tension of the time leading up to the Revolutionary War.
For food, we ate two of the taverns: King's Arms and Shield's. They were a wonderful time and the food was good. They are expensive but they help support the foundation. In the Merchant's Square area, we ate at Retro's diner and Aroma's Coffeehouse. The former was great for diner food while the latter was great for good but inexpensive dinners. The kids loved the indoor smores. 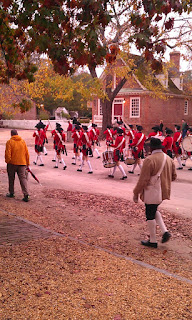 We did a half day at Jamestown. It was amazing to see the fort that was only re-discovered in the 1990's. The archeology museum is a must-see. 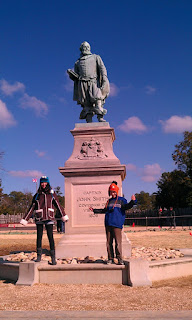 We also spent two half days in Yorktown. One part was spent at the battlefield. We did the driving tour to see the battlements. The other part was spent in the small town. I liked the cannonballs stuck in some of the walls (see Jaya's photos). Below is Redoubt #10 which the Continentals stormed to complete the encirclement of the British. 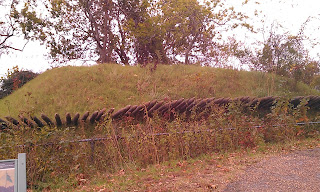 Jaya has more photos on Facebook.
Posted by dosten at 11:00 AM