Is there anything more American than Monster Trucks? It has everything dear to our hearts:
* Obscene amounts of horsepower
* Excessive gasoline consumption
* Wanton destruction
* Over-the-top patriotism
* Intrusive advertising
A couple weeks ago, the family and I took the trip down to Qualcomm Stadium for Monsterjam. It was a blast! The truck drivers really go out of their way to put on a good show. At the end, Gravedigger deliberately wrecked his truck to please the crowd. Just as fun as the trucks was the demolition derby they had during intermission.
There were two negatives on the evening. One was the extreme volume of the public address system; it was much louder than the trucks and very annoying. The other was the obnoxious drunks on the trolley ride back to Old Town. The $9 beers would also have been a negative if I had been stupid enough to purchase one.
Posted by dosten at 2:05 PM No comments:

I highly recommend "The End Of Barbary Terror" by Fredrick Leiner. This book covers the second, and last, Barbary War. A while ago I read, "The Pirate Coast" by Richard Zacks about the First Barbary War in 1804-1805. The Barbary Wars have received renewed interest lately as a result of our dealings in the Middle East as well as the increase in piracy around the world. Both books give a fascinating account of how a very young nation makes its presence known on the world stage. During the first war, American was torn between military force and diplomacy (this meant continued payment of ransoms and bribes to the Barbary pirates). Both were utilized to the end the first war. For the second, American was coming off a victory (of sorts) over England in the war of 1812. We had a good but small navy and chose to use it against the continued misdeeds of the Algerian pirates. A navy squadron, under Stephen Decatur, sunk and captured several Algerian ships and made a show of force persuasive enough to get a treaty fully in America's advantage. The American's were so successful, England and other European countries formed an naval coalition to finish the job and end the Barbary reign forever. A lesson for today? Perhaps.
Posted by dosten at 4:39 PM No comments:

Email ThisBlogThis!Share to TwitterShare to FacebookShare to Pinterest
Labels: books, history, terrorism, then and now

Spent last weekend at Camp Marston for another Woodcutters Weekend. We cut wood in the rain, sleet and snow but thankfully the wood lot had a cover on it. The kids were relieved of duty and spent most of the time playing Ga-Ga. 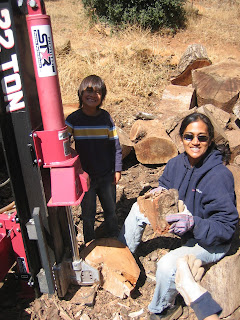 Posted by dosten at 1:58 PM No comments: