* 7.5 mile urban hike from home to the library and back
* Scout service project at SDUMC

Posted by dosten at 9:42 AM No comments:

Midas Touch: Why Some Entrepreneurs Get Rich-And Why Most Don't

by Robert Kiyosaki and Donald Trump - A decent book on entreneurial skills; Kiyosaki's contributions are somewhat better than Trump's

by Mary Randolph - good primer on the confusing subject of deeds
Posted by dosten at 6:15 PM No comments:

Bengt and I went on our first backpacking trip with Troop 774.  We drove out to Anza-Borrego Desert State Park on Friday night and camped at Bow Willow.  We woke up Saturday morning, ate a moderately quick breakfast and hit the trail.  Earlier in the morning, the Scoutmaster and I had drove to the intended campsite to cache some water since the site was not an established campground.  The hike was 4.4 miles in and was a moderate uphill grade since we were heading into a canyon.  The kids all did great and were very relieved to get to the site.  Once there, we had lunch and some relaxation.  We then did an afternoon day hike to further explore the canyon.  The patrols then cooked their dinners which were nicely packed into zip bags for easy identification and preparation.  I hit the sack quite early while the kids burned off their desserts.
Sunday morning saw an early cold breakfast and then back to the trail for the hike back to Bow Willow.
Everyone had a great time and I can't wait to get some more backpacking treks in. 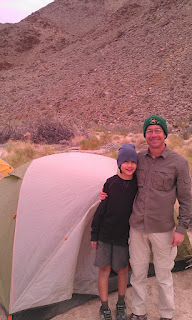 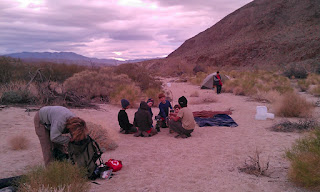 Posted by dosten at 6:16 PM No comments:

Posted by dosten at 6:12 PM No comments:

Much to Jaya's dismay, we took a family trip to Death Valley NP over the New Year's weekend. We left home early in the morning and drove up the 15 to Baker. We stopped there for gas and some delicious Alien jerky. We then took the 127 to Shoshone. From there we took the 178 into the park. This route enabled us to see the southern part of the park on our way in. We made stops at the Ashford Mills ruins, Badwater and the Natural Bridge hike. We ate lunch at the 49'ers Diner at the Furnace Creek Ranch before hitting the temporary visitor's center. The regular center was still under refurbishment and we were a very bummed since the temporary one facility not have any exhibits or much other information, although the rangers were very nice. After setting up camp at the nearby Furnace Creek campsite, we head up the road to see the Harmony Borax Works ruins. After that, it was back to camp for dinner and an early night (especially since we couldn't get a fire going).
The next day we started by visiting the Devil's Golf Course which was very strange. Next, was Artist's Drive. At our next stop, Golden Canyon, we ran into a friend from San Diego, Terry Sheehy. His son was very happy to see Bengt and we met up again at camp later at night. Then we headed out of the park to visit the ghost town of Rhyolite. On the way, we stopped at Beatty, NV for lunch. Beatty is a small, dusty town but the food and service at KC's Depot was excellent. We also completed our first Geocache Challenge at the town clock tower. Rhyolite was a fun ghost town with some pretty substantial buildings. Bengt also wanted to the check out an old mine and there were plenty to choose from. Rhyolite is also home to the outdoor art project called Goldwell. I liked the phantom statues. On the way back to camp, we stopped at the Salt Creek trail but failed to spot the elusive pupfish.
The next day, we finally got a fire going thanks to Terry's donation of a fireplace log. That seemed to get the moist wood we bought at the general store going fine. We were able to do a couple camper pies and get warmed up in the morning cold. After breakfast, we broke camp and headed for the dunes. We stopped briefly at the Stovepipe well marker. The Stovepipe dunes are truly amazing. Bengt and I hiked to the top of one of the higher ones. The sand felt good on our bare feet. We then had lunch at the Stovepipe Wells Saloon and then headed to the Eureka mine. The mine and small ghost town was really neat as much of the equipment and stuff was still there. The spot is pretty remote so it doesn't get a lot of visitors. The last stop for the day was Mosaic Canyon. This hike was up a wash that is lined by polished marble-like stone. We then checked into the Stovepipe Wells Inn for a nice, hot shower and relaxing evening.
On the way back home, we exited the park to the west along 190. We made a quick stop at Panamint Springs to see what was there then headed south along Panamint Valley Road. We were expecting to stop at Trona for food, but Trona turned out to be a miserable place and nothing seemed to be open. We kept on going along Trona Road to hook up with the 395. We stopped for lunch in Adelanto, got onto the 15 and headed home. The drive along 395 was not as nice as the drive in.
It was a great trip. Next time, we will do some backcountry excursions with a 4x4 vehicle. We really want to see the Racetrack which is only accessible via a long dirt road.
Posted by dosten at 9:09 PM No comments: