In San Diego county at least. We took a drive up to Mount Palomar to check out the recent snow fall. The kids griped most of the way but were very excited once they saw the snow on the roads going up the mountain. 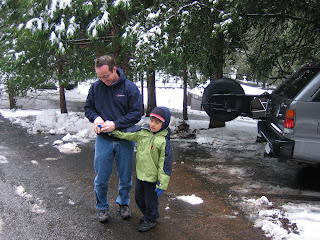 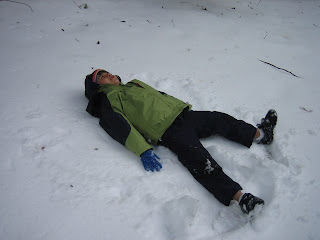 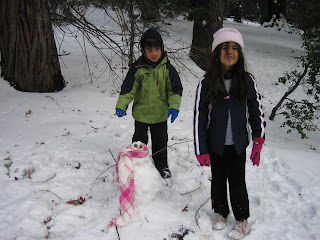 Posted by dosten at 8:54 PM No comments:

I did some major surgery on my Honda Passport this weekend. It was due for a new timing belt and had a leaky valve cover gasket.
The gasket was fairly straight forward, but time consuming since some of the bolts are hard to reach.
The timing belt was another matter. The job was going good until I got to the crankshaft pulley. The bolt holding it on is quite tight as you can imagine but the hard part is keeping the pulley from turning while you try to get it loose. The Haynes guide says to simply hold the pulley with a big set of channellocks. This is nearly impossible. I first tried putting on a strap wrench with the handle up against the frame to keep it in place. I broke two strap wrenches this way. Plan B. The Passport board had a good suggestion: stick your breaker bar down through the bottom of the car, slip on a long pipe and hit the starter (make sure you pull the ignition so it doesn't start). I had to get a pipe from Home Depot, but it worked like a charm. The second major difficulty was getting the new belt on. I had inadvertenly left the camshaft pulleys inbetween strokes so when I removed the belt, they snapped into a new position, throwing off my timing markings. I had to turn the sprockets with one hand and weave the belt with another; it took about an hour to get it right. Then I realized I couldn't get the hydraulic tensioner back in so off came the belt and I had to repeat the exercise. The last diffuculty involved reattaching the crankshaft pulley bolt. I had to find a way to stop the pully from turning while I torqued the nut. Since I was out of strap wrenches, I jury-rigged a solution. The pulley has a flange on it with two threaded holes. I imagine this is for a tool that the dealers use to keep the pulley from turning. Since I don't possess one of these tools, I screwed in a small machine bolt. I then borrowed a large pipe wrench from my neighbor and gripped the screw with it; the handle of wrench was up against the frame to keep from moving. I then was able to torque the nut a good deal. My breaker bar is 28" long and I was able put full strength into it, so I imagine I want over the specified 123 foot-lbs.
I haven't decided if all this was worth the $600 bucks or so my mechanic would charge.
Posted by dosten at 7:50 PM No comments:

I want to build one of these before I turn 40.
Posted by dosten at 8:28 PM No comments: